From significant business changes to noteworthy product launches, there’s always something new happening in the world of design. In this weekly roundup, AD PRO has everything you need to know.

Looking for the Perfect Finishing Touch for Your Next Client Project? Try Some Tableware From the Ritz Paris

This weekend is set to include a very special—and limited—opportunity for fans of the iconic Ritz Paris hotel. Thanks to Artcurial, individuals will be able to bid on pre-renovation examples of the Ritz’s tableware, glassware, silverware, and other cutlery. (If this concept rings a bell, it might be because an auction of the hotel’s furnishings already took place a couple years ago.) Regardless, highlights of this sale include a Marthe service commissioned by Ceìsar Ritz in 1898 for the opening of the hotel, a Ritz Club service designed by Jean Boggio, and more than 450 lots of Limoges porcelain. “This auction will be the ultimate chance to take home a piece of the iconic universe of the legendary hotel that is the Ritz Paris,” Stéphane Aubert, auctioneer and associate director of Artcurial, says.

In Pursuit of a More Just World

#SharetheMicNow Initiative Takes Off in the Home World

Spearheaded by designer Albie Buabeng, this new social media campaign is based on a June 10 initiative where black women took over white women’s social media accounts for the day. (The original included the likes of activist Angelica Ross, #MeToo movement founder Tarana Burke, and fencer Ibtihaj Muhammad, taking over the accounts of celebrities like Gwyneth Paltrow, Hilary Swank, and Julia Roberts.) Buabeng’s initiative pairs up interior designers, editors, and others within the home industry’s Black community with white counterparts for a two-week-long social takeover. As Buabeng states: “For far too long, Black women’s voices have gone unheard, even though they’ve been using their voices loudly for centuries to enact change. Today, more than ever, it is necessary that we create a unifying action to center Black women’s lives, stories, and calls to action. We need to listen to Black women. This is why we have chosen to #ShareTheMicNow.” Follow AD PRO’s Instagram account to see Good Housekeeping editor Monique Valeris’s own takeover.

After a successful first session, PR agency Novità’s second “Diversity in Design: The Time for Change Is Now” panel is set to take place tomorrow at 11 a.m. EST. Participants will include Novità’s own Joseph Cephas as well as Ronnie Belizaire, IIDA; Maya Bird-Murphy, AIA; and Angelita Scott, ASID. Look forward to a robust and intellectually stimulating conversation.

Bed Bath & Beyond may be having a tough year, but that hasn’t stopped the retailer from recently putting its money where its mouth is. The company announced that it is donating $1 million in products to the NAACP. The donation is part of its Bringing Home Everywhere initiative that aims to aid those impacted by COVID-19.

Designer Erin Ruby will serve as chapter president for IIDA New York’s 2020–2021 term, it was announced this week. Founder of the multidisciplinary firm Erin Ruby Design, and cofounder of nonprofit SolutionsNOW Foundation, which helps those experiencing food, housing, and economic insecurity, Ruby, whose term starts next month, will promote community-related outreach and cultural diversity for design professionals throughout New York state.

The Frick Announces a New Board Member; ASID Gets an Interim CEO

Sharese Bullock-Bailey is the newest board member of the Frick Collection. An expert in film who formerly worked in finance, Bullock-Bailey was nominated earlier this year. Elizabeth Eveillard, chair of the Frick’s Board of Trustees, said in a statement, “The Frick’s Trustees join me in welcoming Sharese and know her engagement in arts education will further enrich our efforts.” Also of note: The ASID National Board of Directors has selected Gary Wheeler as its interim CEO. Wheeler is a Gensler alum with over 30 years of experience within the industry.

Sustainable home goods brand Coyuchi has named textile expert Whitney Thornburg its new design director. It’s a role that will require her to consider and plan for a product’s life after use. Most recently, Thornburg served as a professor at California College of the Arts, where she focused on ecological design courses that involved coursework in planning for a garment’s life cycle. “Few other businesses achieve the environmental standards of Coyuchi,” Thornburg said in a statement. “People are fans of the Coyuchi brand because it is beautiful, but also functional. They can use the textiles, see the quality, and know that it’s meant to last. The company’s continued commitment to aesthetics, sustainability, and quality at every step of the design process is ultimately what drew me here.”

French legacy interior design and furniture brand Rinck ;announced its acquisition of interior design firm J.C.T. earlier this week. The brand, which is expanding via its new acquisition to reach more consumers within the Middle East, also named Stéphane Tenèze as the COO of the Rinck Group.

The Grand Tour’s co-owners, Caroline Rafferty and Julie Cummings, are closing their retail shop at the Royal Poinciana in Palm Beach later this month, in an effort to invest in their burgeoning e-commerce business and trade-only showroom. The business will take its next steps in a 2,500-square-foot location at the Caroline Rafferty Interiors office in West Palm Beach, where the team has developed a curbside delivery and samples program. Rafferty noted in a statement, “Since we launched our e-commerce website last July, the volume of our online and to-the-trade business far outweighed that of our local and tourist brick-and-mortar retail shop. Global orders, thanks to our extensive direct-to-consumer marketing, make up 70% of the Grand Tour business. As a result of the changing shopping patterns in our post-pandemic present and future, we feel that a significant investment in our e-commerce platform and trade program is the best way to proceed.”

Those in search of a summertime dishes refresh needn’t look further than Tamam’s new Murad collection, which is set to launch next week. “We feel so strongly about being part of a system that is founded on handmade techniques and personal relationships with the makers and masters,” Tamam cofounders Clare Louise Frost and Elizabeth Hewitt tell AD PRO about their work in general. Speaking specifically about the cerulean Murad collection, they note: “It is a hard color to make in glaze.… Turquoise and blue are good luck colors—and also happen to be the hues of the nazar boncuk evil eyes. This [line] is our wish for good luck, protection, and health and happiness to everyone!”

This June is a big month for Nathalie Du Pasquier. Not only does she have three new exhibitions, but their points of view have been amplified under one unified and collaborative effort. Du Pasquier explains to AD PRO: “Tamara Corm of Pace Gallery had the bright idea of connecting an online show with two concurrent gallery exhibitions I had planned. She knows me quite well and knows what kind of ideas make for a more accurate portrait of what I do. The three shows really complement one another, each [illuminating] a different aspect of my overarching practice, which would not so easily [become clear] in any single exhibition.” All three exhibitions run through the end of this month.

Lake Como Design Festival usually takes place in the region of Northern Italy that was hard-hit by the coronavirus. That’s why news that it will still take place this fall is so interesting to hear. This week, the organization announced the updated plans for its third-annual event, as well as the fact that it will run September 14–19.

Glass House Design Gets Adapted for an Unexpected Use

The Menokin Foundation has launched the Glass House Project, an interesting effort to preserve and protect the home of Francis Lightfoot Lee, who signed the Declaration of Independence. “Until the Foundation acquired it, Menokin was the only home of a Virginia signer of the Declaration of Independence threatened by being lost to the ravages of time and the elements,” Menokin board of trustees president Benjamin Ogle Tayloe Jr. said in a statement. “The Foundation decided that it was imperative not only to save what remained of the house, but to develop an innovative way of connecting people to the span of history that the house embodies.”

Vitra’s campus in Weil am Rhein, Germany, is known to be a starchitect wonderland. And now it’s set to have a perennial garden by Piet Oudolf. Thirty thousand species of plants are being cultivated in advance of the garden’s official 2021 opening. Currently blooming on this side of the Atlantic is “A Love Letter to New York.” The floral arrangements, which can be found on the streets of New York City and are meant to bring joy to local residents, are presented by LEAF and Lewis Miller Design.

WantedDesign, the popular design fair that typically takes place in Manhattan and Brooklyn each May, was forced to cancel its IRL festivities this year. Since it would have been the event’s 10th anniversary, this news came as a particular blow for the organizers and exhibitors. Luckily, some programs tied to WantedDesign have moved online—and they all highlight innovative student work. Its Conscious Design Awards, recognizing student submissions, are now available to view, as is an online show of graduates in RISD’s furniture design program. There’s also a place to browse proposals that Rochester Institute of Technology interior design students created for what would have been a lounge space at the event. Here’s to hoping that we’ll get to see even more from these young talents at next year’s show.

Earlier this week, The Architect’s Newspaper reported that the Trump administration has taken steps to curb the environmental safeguards that are in place for federal construction projects. As troubling as the implications for that news undoubtedly are, another bit of architectural news related to the White House has reached a new stage of fruition. Earlier this year, Trump issued a widely decried executive order relating to the use of classical architectural elements for all federal projects. Now, The Architect’s Newspaper also reports that a planned renovation of the Federal Reserve Board headquarters is primed to set the stage for the order’s first real battle.

The Novogratzes Are Here to Help Solve Your Interior Design Challenges

Tue Jun 23 , 2020
Given the current state of the world, there are two things we now have plenty of time to accomplish: reading books and tackling interior design projects. And with the new book Novogratz Design Fix: Chic and Stylish Tips for Every Decorating Scenario by HGTV stars Robert and Cortney Novogratz (Rizzoli), […] 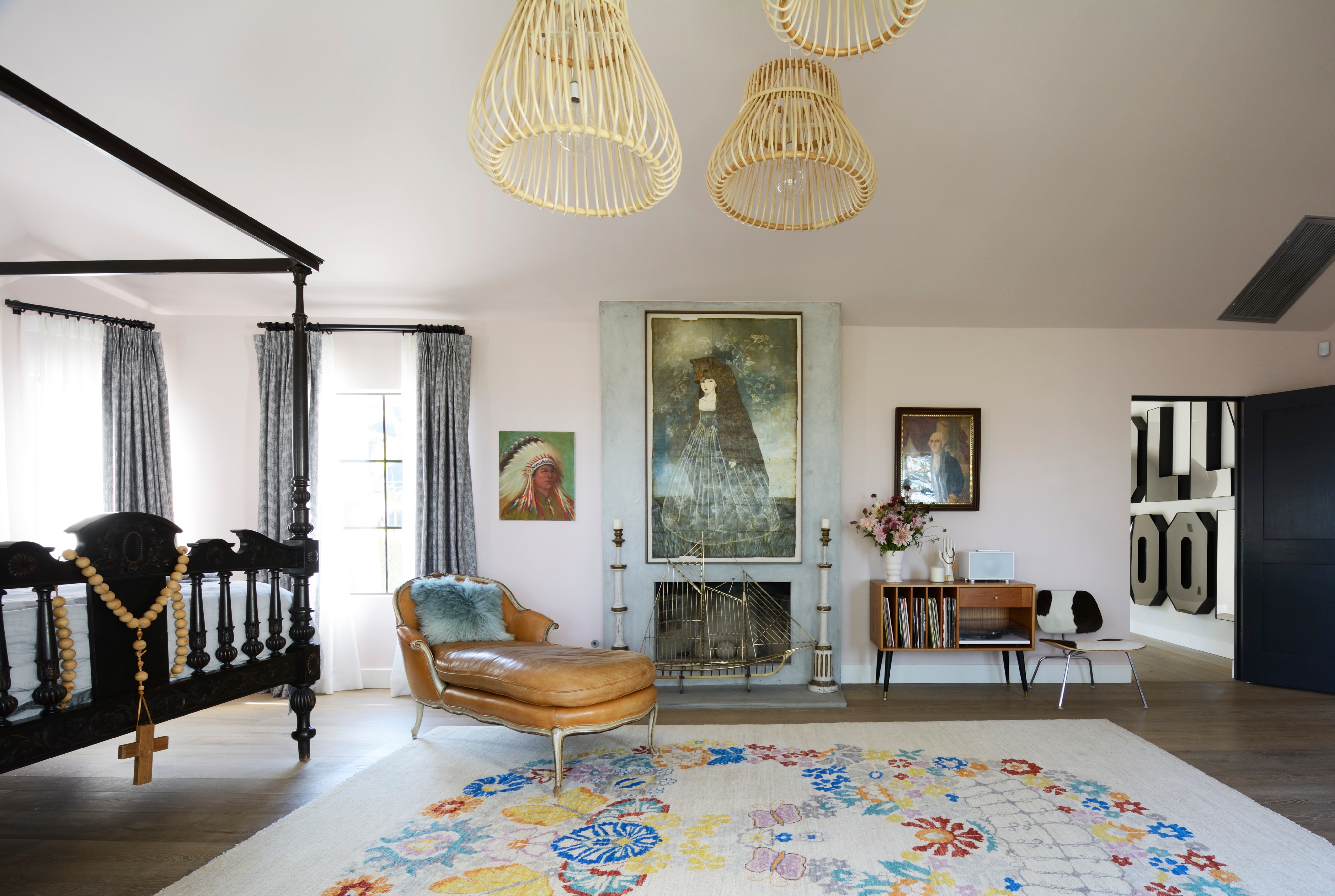