His uncle, John Johnson, was also a butler, and the flouting of safety protocols that has made the White House a coronavirus hot spot has also put the career staff members who work where President Trump and first lady Melania Trump live at risk of exposure. It has Allen puzzled and incensed.

The White House residence staff members are largely Black and Latino, and often elderly, according to Kate Anderson Brower, who compiled a trove of interviews with former staffers for her book “The Residence.” Numbering 90-some full-time ushers, butlers, housekeepers, valets, florists, engineers and cooks charged with maintaining the historical house and creating a comfortable home free from prying eyes, they work more closely with the first family than perhaps anyone else in that building. These employees often keep their positions for decades and work for administration after administration, viewing their job as holding up the integrity of the White House regardless of who is in office.

“They’re supporting an institution, not a singular presidency,” said Anita McBride, who was Laura Bush’s chief of staff and is a White House historian for American University.

Discretion, too, is a key component of a residence staffer’s job. Speaking out about anything, including working conditions, can be a cause for dismissal. Two members of the housekeeping department who tested positive several weeks ago were told to use “discretion” when discussing their diagnosis, according to a New York Times report Monday that The Washington Post confirmed.

As the residence staff has been caring for the first family, a chorus of concern has started to rise among former White House and residence staff members about whether the first family and the administration are taking care of those employees in return. For months, this administration has treated the White House as a bubble immune to the coronavirus, ignoring guidance from its own Centers for Disease Control and Prevention by refusing to wear masks, neglecting to maintain social distance and relying on rapid coronavirus tests that have been shown to miss infections. With the president, the first lady, press secretary Kayleigh McEnany, top aide Hope Hicks, former counselor Kellyanne Conway and an ever-growing number of administration officials testing positive for the coronavirus, that bubble has burst. Now others are trying to give voice to those working behind the scenes in that building who cannot speak on their own behalf.

“I know that people in there are scared,” said Sam Kass, head chef for the Obamas for six years. “I’m sure that they are concerned about their own lives and their families and feel very torn about balancing their responsibilities to their country, as they see it, and putting themselves in harm’s way.”

On Sunday, the chorus rose on behalf of Secret Service personnel, who have been voicing, in unprecedented fashion, outrage over the president’s seeming indifference to the health risks faced by those protecting him. Most recently, at least two of them were locked inside an SUV with the president — an active covid-19 patient — as he took a short motorcade ride to wave at his supporters outside Walter Reed National Military Medical Center.

The Secret Service, though, does much of its work in public. Residence staffers are meant to be invisible; nobody can see them in the same photograph as the president as he waves to supporters from behind his tinted windows.

As reports of White House officials testing positive continued to roll in, Rep. Gregory W. Meeks (D-N.Y.) said he has been thinking about “the other people that work there, the ones that clean the floors and cook the food and serve the food and cut the grass. All these average, everyday, hard-working Americans who go home to their families when there’s been no protocol in the White House in regard to covid.”

Underscoring the indifference paid to pandemic protocols, it wasn’t until Sunday night, nearly three days after the president informed the public of his covid-19 diagnosis, that White House management sent out the first email to staffers telling them not to come to work if they have symptoms, and to ask their supervisors about “practicing telework.”

“Unlike other offices at the White House, it is probably more difficult for anybody on the residence staff to telework,” McBride said. “I mean, the nature of their work is to be maintaining the house, cooking for the family.”

White House spokesman Judd Deere said in a statement that the administration “does take any positive case seriously and has extensive plans and procedures in place to prevent further spread.” That includes contact tracing that follows CDC guidelines.

Melania Trump’s spokeswoman, Stephanie Grisham, said that “every precaution is being taken to keep residence staff safe and healthy,” with consultation from the White House Medical Unit.

Christopher B. Emery, a former chief usher who wrote a book about his experiences under Ronald Reagan, George H.W. Bush and Bill Clinton, said he found himself scouring photos of the Amy Coney Barrett nomination event in the Rose Garden on Sept. 26, wondering about the well-being of his former co-workers. “You can see in the background folks wearing masks,” he said. “That’s the residence staff. They were actually the only people wearing masks.”

Deesha Dyer, Michelle Obama’s last social secretary, said that “it makes me angry because I do care about these people, and they’re amazing, and so many of them did not have a choice.” She said she has been calling residence staffers to check whether they’re okay. “They love their jobs, and they’re excellent at their jobs, and they’re part of the institution. And it’s just trifling and unnecessary to put them at risk because you can’t be bothered to wear a mask.”

Historically, the White House’s butler corps has been almost exclusively African American. “This is going back 200 years, but some in early stages of our history were enslaved,” McBride said.

That tradition continued after emancipation. “Back in the Jim Crow era, those are some of the jobs we got. And it was an honorable profession,” Charles Allen said. These jobs have also been regularly held by members of the same family for successive generations.

Much of today’s staff is composed of African American, Latino or Filipino employees, and many are older, making them among the most vulnerable populations in the pandemic.

They’ve already lost one of their legendary members. In May, Wilson Jerman, who had been a protege of Eugene Allen’s, died at 91 after contracting covid-19. He’d retired in 2012 and served 11 presidents, ending with Barack Obama.

Meeks said he sees the residence staff in the same light as other Black and Brown essential workers who can’t follow stay-at-home orders. “They need their jobs. They can’t afford to get fired,” he said. “It’s the same kind of concerns I would have for any business in America that is not trying to take care of their essential workers. I hope there’s been an immediate change in protocols at the White House in protecting these workers.”

Right now, the residence staff is tending to one active coronavirus patient in Melania Trump, who tweeted Monday that she was “feeling good” and resting at home. And with the president’s expected return Monday night from Walter Reed, they’ll have a second patient, one who has experienced more severe symptoms and who has historically shunned the advice of experts.

Even if the president and first lady stay confined upstairs, there is risk of exposure throughout the building, because White House political staffers, who have routinely not been wearing masks, often pass through the Rose Garden and the historical rooms on the first floor — all of which are manned by residence staffers.

Dyer, among other former White House staffers, expressed concern for how narrow the hallways are in the residence. “There’s obviously the chance that the residence team is just walking, doing their job and catching the droplets or whatever,” she said.

At the start of pandemic, absent directives from their bosses, residence staffers “took it upon themselves” to adhere to CDC guidance and wore masks out of concern for their own health and the health of the first family, according to a former staffer.

By April, Melania Trump had required the use of masks for the residence staff as well as the political staff in her East Wing offices, Grisham confirmed. Then, as now, the president actively encouraged administration officials and his supporters to eschew them.

At home, behind closed doors, the first family was trying to limit its viral exposure, while going to rallies and other events without masking or social distancing, and then returning back to their residence staff at the White House. Former staffers doubt the first family ever wear masks around the staff.

“On one hand, it’s what he should have done,” Kass, the Obama chef, said of the mask mandate at the residence. “But it’s also pretty unforgivable that you would take those steps for the family but not for the rest of the people that work there­­ — or for the country.”

Josh Dawsey and Jura Koncius contributed to this report. 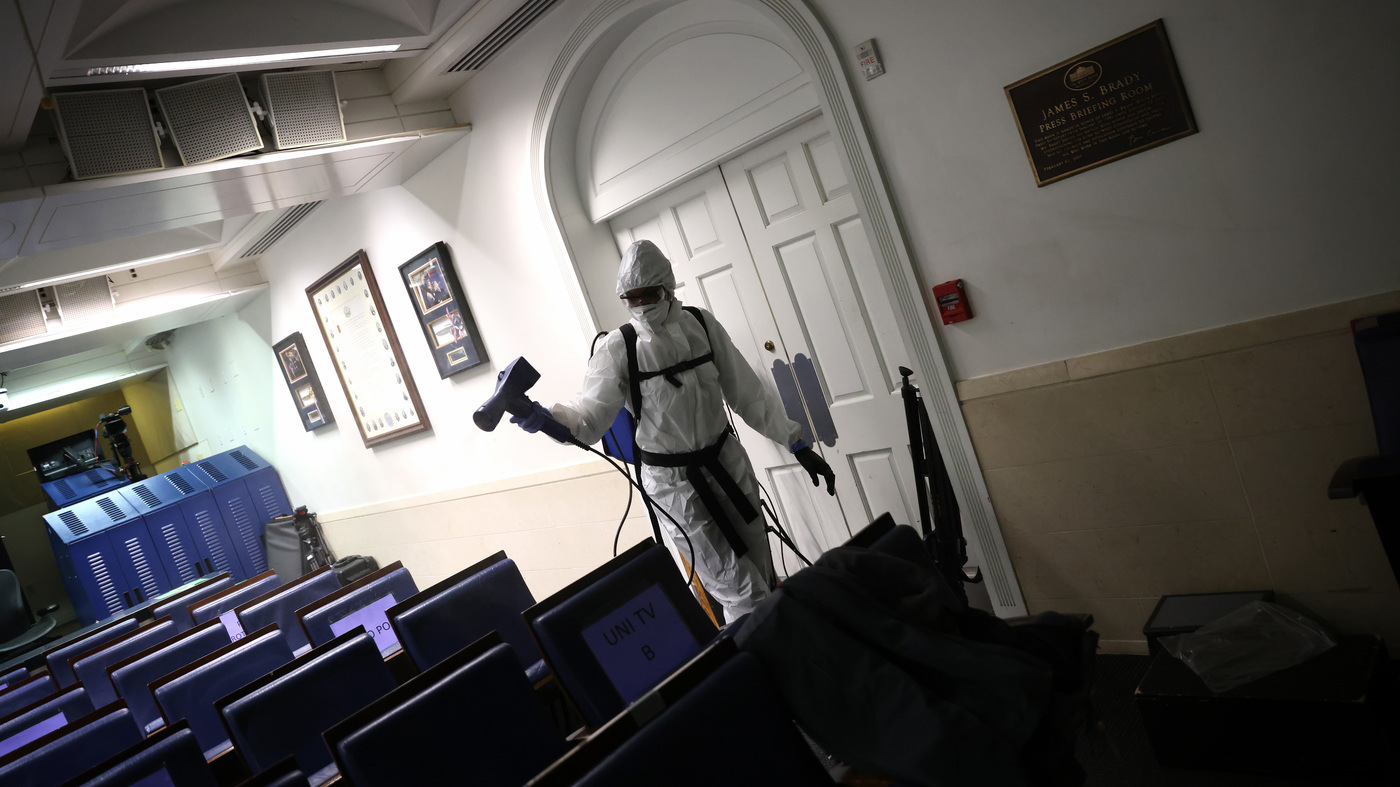