In the last 20 years, only three Best Picture winners have also won the Oscar for Best Production Design or Art Direction (“The Shape of Water,” The Lord of the Rings: The Return of the King,” and “Chicago”). Yet there’s a very good chance that it will happen again this year. That’s because all five production design nominees are so brilliantly effective in their world building, ranging from the period pieces “1917,” “Once Upon a Time in Hollywood,” “The Irishman,” and “Jojo Rabbit,” to the contemporary outlier, “Parasite.”

All five possess the two most important aspects of successful production design: innovation and story support, while, at the same time, dazzling us with period detail, cultural authenticity, and iconic style.

Without a doubt, though, the frontrunner is Dennis Gassner’s masterful work on Sam Mendes’ continuous-shot, World War I extravaganza, “1917,” which has grabbed momentum after its PGA and Golden Globe wins. The intricate set builds (with set decoration by Lee Sandales) for the trenches, No Man’s Land, the ravaged countryside, and the burning village were realistic and synchronized in precise accordance with the choreography of Roger Deakins’ tour de force camera work. If Deakins is going to win his second Oscar, then how can Gassner be denied his second as well?

“Let’s do something interesting,” Mendes told Gassner. “And that’s what it was,” said the production designer, “an interesting look into a world that is enormously horrific, but with a grace and style.” Gassner designed a dangerous obstacle course for the two soldiers Schofield (George MacKay) and Blake (Dean-Charles Chapman) to run through. “It’s a choreographed dance with the camera. It was like two soldiers running through a fog of war that’s frozen in space.”

And yet, despite the horrific devastation, there were hints of beauty everywhere, marked by the beginning and end of the journey beside two lovely trees. “When in doubt, make everything beautiful,” said Gassner. “And that beauty was connected to the landscape of The Great War. There was no artifice. It was the Art of War. It was like fighting a war.”

After they shot the last day, Gassner walked with Deakins and asked him, “How are you doin’?” Deakins said, “I don’t know how we did this, man. I can’t even remember yesterday.”

With Quentin Tarantino’s “Once Upon a Time in Hollywood,” we return to Tinseltown in a loving, nostalgic, 50-year time capsule. But the facelifts to both Hollywood Blvd. and Westwood Village were not easy to pull off for production designer Barbara Ling (with set decoration by Nancy Haigh). For Hollywood, the restoration included such bygone cultural fixtures as the Pussycat Theater, the psychedelic Aquarius Theatre (which opened “Hair” in 1968), and Peaches Records & Tapes. By contrast, the creepy Spahn Movie Ranch recreation where the Manson Family lived offered a completely different vibe.

“LA was never a preservation city, and they keep tearing down these glass towers,” Ling said. “But LA has always been about rebuilding itself. They say it’s even tougher to find little corners to build facades on top of.”

For Martin Scorsese’s decade-spanning, mob epic, “The Irishman,” production designer Bob Shaw and set decorator Regina Graves created nearly 30 sets and about 300 locations on a tight 108-day shooting schedule. In addition to five period gas stations (reconstructed from existing buildings), they tackled such iconic locations as the famed Howard Johnson’s roadside motel (refurbishing a Long Island motel by resurfacing the pool deck and constructing the orange and aqua masonry), and imaginative set builds for Umberto’s Clam House in New York’s Lower East Side (putting up a facade on an existing building and redressing the entire street), and the Villa di Roma restaurant in Philadelphia (which was a compendium of different ideas).

“Marty was very suspect about building the Villa di Roma because he said, ‘I know those places and you can smell the decades of sauce in between the floorboards,” said Shaw. “But we had a lot of filming to do there. There wasn’t any way we were going to take over a restaurant. We built that and had to convince him that we could get the same level of grime. We looked at a lot of locations and found strange details. There was one that was like a waistline from the plumbing above and it ran down the wall and into the back of the banquette. One place had layers of grease everywhere. We duplicated that look to make it lived in. The more kind of oddball accounts that you can add, particularly in Little Italy, the more realistic it looks.”

The baroque house in Taika Waititi’s “Jojo Rabbit” served as a playground for the conflict between love and hate in his Nazi satire. Production designer Ra Vincent and set decorator Nora Sopková built the modular set at Prague’s Barrandov Studios, which allowed scenes to be shot in any direction by cinematographer Mihai Malaimare. The house brightened up the broken down period with panache and crucially reflects the buoyant personality of Jojo’s bohemian mom, Rosie (Scarlett Johansson). It makes use of such diverse design movements as Arts & Crafts, Art Nouveau, Art Deco, Bauhaus, and Surrealism. Vincent additionally emphasized a warm, heightened color palette indicative of Rosie’s forward-thinking sensibility.

“I was fortunate to work with special art department people in the Czech republic who helped us source antiquities,” Vincent said. “We had some really beautiful, period-accurate furnishings and lighting. And the set was built on stage so we could have full control over color and rolling walls. And enough space to pull ceilings out. All those intimate spaces acted like individual story moments or emotional beats.”

Bong Joon Ho’s “Parasite” masterfully explores class divide in Korea, boasting the season’s most elaborate production design work by designer Lee Ha Jun. The exquisite Park mansion serves as a central character; and the home’s vertical design expresses space and division, highlighted by wood, glass, and spare furniture. The house was designed as an elaborate series of sets, including a soundstage for the secret passage to the bunker. In fact, the vertical design of the soundstage allowed the the reveal to be shot with Steadicam as one continuous scene.

“In the film, we wanted all the interior and architecture to be simpler, wider, and sometimes denser, more than complicated,” said production designer Lee Ha Jun (who worked with set decorator Cho Won Woo). “So the set was, in some ways, recklessly huge, but, all in all, I believe it was a perfect choice to make it into one set, regarding efficiency of the production process and for actors to concentrate, since it is a unique, unfamiliar space… and [they] could take advantage of the structure to pull out their maximum potential.”

Tue Apr 21 , 2020
Call it ingenuity, or better yet, creative distancing: As much of the country’s workforce has shifted operations to the home front, designers are mining their own havens for the best places to set up their home offices — and relearning what is vital for tapping into their best ideas. It […] 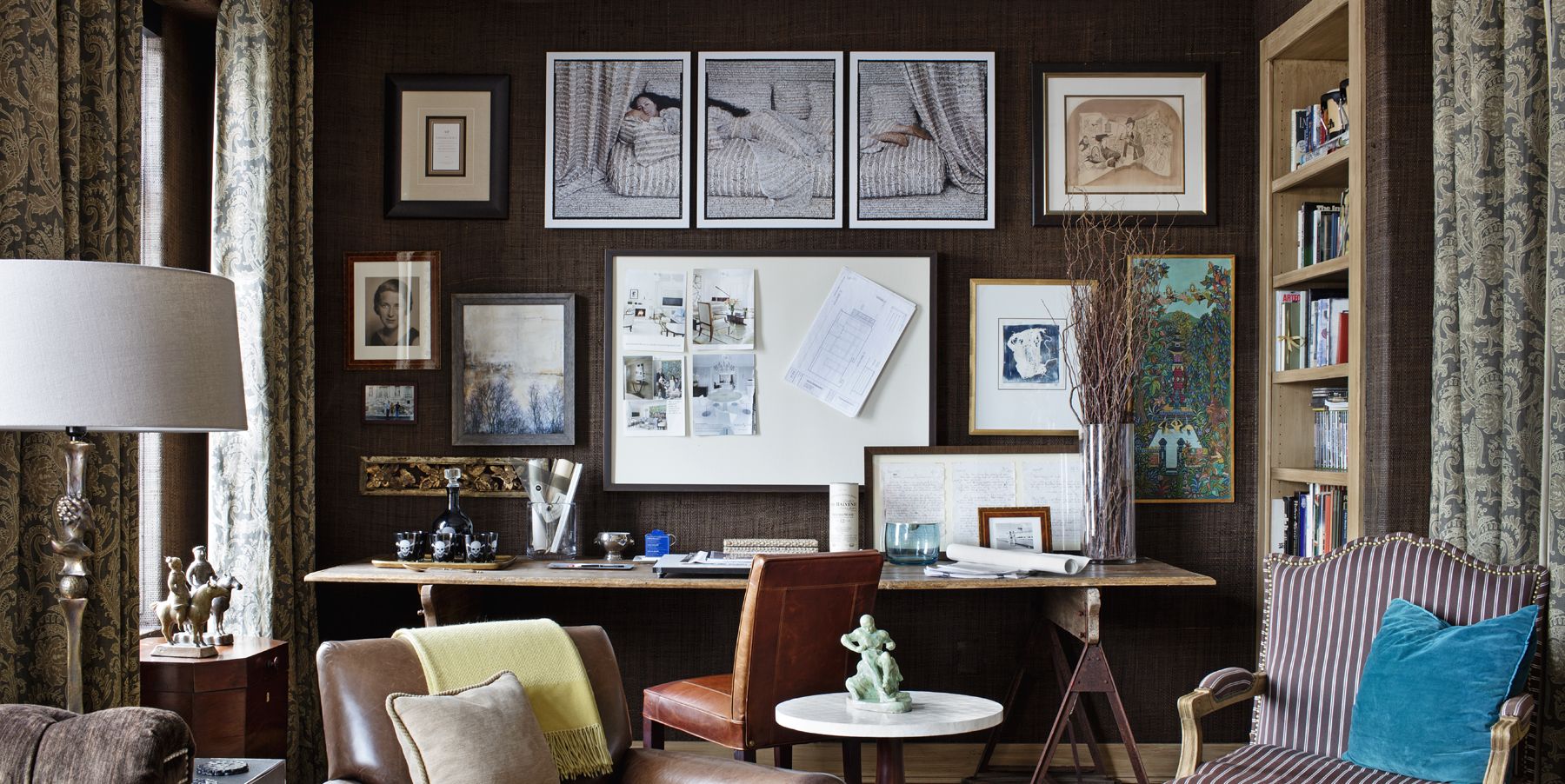